The law offices of Galloway & Lyndall, LLP occupy a finely detailed Greek revival structure known as “The Lewis-Mills House,” located at the corner of North Hill and Tinsley Streets in downtown Griffin.  The two storied Lewis-Mills House has played an integral part in the history of the City of Griffin, and it serves as a fine example of architecture of the antebellum era.  The simple geometrics of its stucco over brick and cement exterior, as well as the details of its interior doorways, suggest the design of architect Charles B. Cluskey.  Mr. Cluskey also designed historic buildings in Augusta and Milledgeville – most notably the old Governor’s Mansion in Milledgeville. 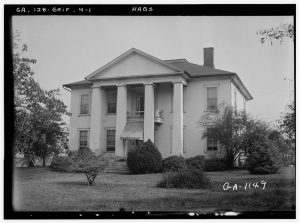 The history of The Lewis-Mills House parallels that of the City.  It was originally constructed by Rev. Obediah Gibson in 1852-53 on the northernmost boundary of the original town plan for the City. It was bought by William Hammond and his mother, Mrs. Emily W. Lewis from Massachusetts in 1853.  Prior to and during the first years of the Civil War, Confederate leaders were entertained there, most notably Alexander H. Stephens (Vice-President of the Confederacy and Governor of Georgia), Robert Toombs (Secretary of State of the Confederacy) and Benjamin Hill (Confederate and United States Senator from Georgia).  During Sherman’s March to the Sea, The Lewis-Mills House served as a hospital for both injured Union and Confederate troops.

After the war, Mrs. Lewis lived in the house with her granddaughter, Lavonia Hammond, who married John B. Mills in 1878.  When Mrs. Lewis died in 1901, Mills purchased the house from her heirs.  The Lewis-Mills House was featured in the society column of the Atlanta Constitution in the late 1920s which described and detailed a social function conducted there.  Ms. Lavonia Hammond Mills died in 1936, and the house passed out of the Lewis and Mills families, though its association with them by name continues to the present.  After 1936, The Lewis-Mills House declined through a succession of owners who converted it into rental property.

The Lewis-Mills House was placed on the National Register of Historic Places in 1972.  Partially renovated, it housed the Griffin-Spalding County Historical Society.  Newton M. Galloway purchased the house in 2002.  Following extensive renovations, Galloway & Lyndall, LLP has occupied The Lewis-Mills House since May, 2003.  In addition to being home to the firm’s law practice, the Griffin Area Arts Alliance and the Griffin-Spalding Land Bank Authority meet there.  A number of political fundraising events have been held at The Lewis-Mills House for local and statewide races.  It has also hosted meetings of numerous individuals and groups that are interested in the restoration of the North Hill Street corridor.